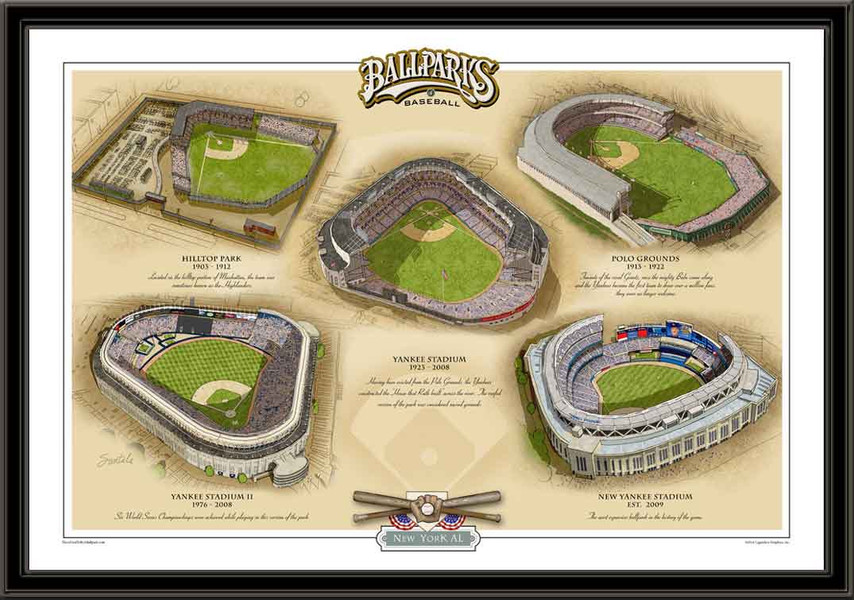 Celebrating the iconic ballparks of yesterday and today, this vintage print shows the historic ballparks of the New York American League team. Printed using archival inks on heavyweight paper, these prints are rated to be light fast for 72 years under glass.

The copy reads:
HILLTOP PARK 1903-1912  Located on the hilltop portion of Manhattan, the team was sometimes known as the Highlanders.
POLO GROUNDS 1913 – 1922  Tenants of the rival Giants, once the mighty Babe came along and the Yankees became the first team to draw over a million fans, they were no longer welcome.
YANKEE STADIUM 1923-2008  Having been evicted from the Polo Grounds, the Yankees constructed the “House that Ruth built” across the river. The roofed version was considered sacred grounds. The park was closed for renovations for the 1974 and 1975 seasons.
YANKEE STADIUM II 1976-2008  Six World Series championships were achieve while playing in this version of the park.
NEW YANKEE STADIUM Est. 2009  The most expensive ballpark in the history of the game.