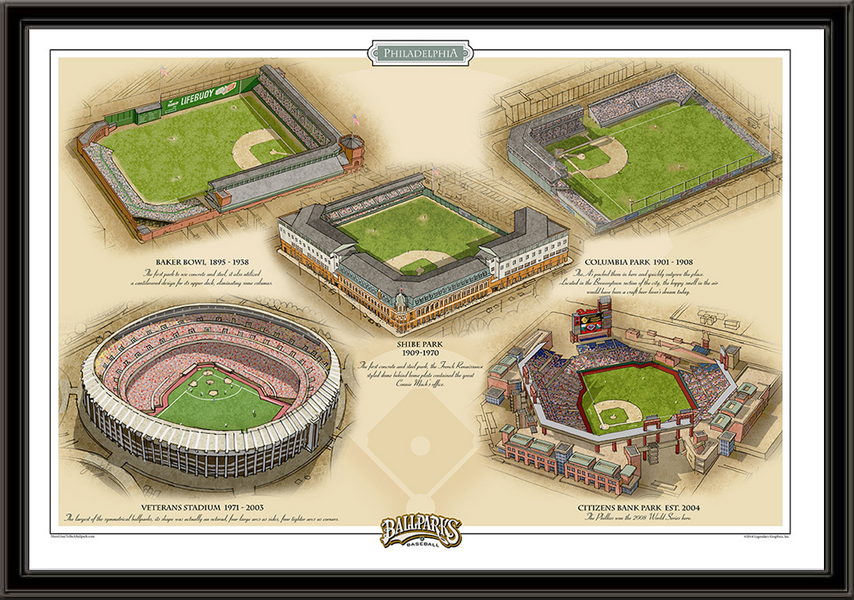 Celebrating the iconic ballparks of yesterday and today, this vintage print shows the historic ballparks of Philadelphia . Printed using archival inks on heavyweight paper, these prints are rated to be light fast for 72 years under glass.

The copy reads:
BAKER BOWL 1895-1938  The first park to feature the use of concrete and steel, it also utilized a cantilevered design, eliminating some columns.
COLUMBIA PARK 1901-1908  The Athletics packed them in here and quickly outgrew the place. Located in the Brewerytown section of the city, the hoppy smell in the air would have been a craft beer lover’s dream today.
SHIBE PARK 1909-1970  The first all concrete and steel park, the French Rennaissance styled dome behind home plate contained the great Connie Mack’s office.
VETERANS STADIUM 1971-2003  The largest of the symmetrical ballparks, its shape was actually an octorad, four large arcs as sides, four tighter arcs as corners.
CITIZENS BANK PARK Est. 2004  The Phillies won the 2008 World Series here.