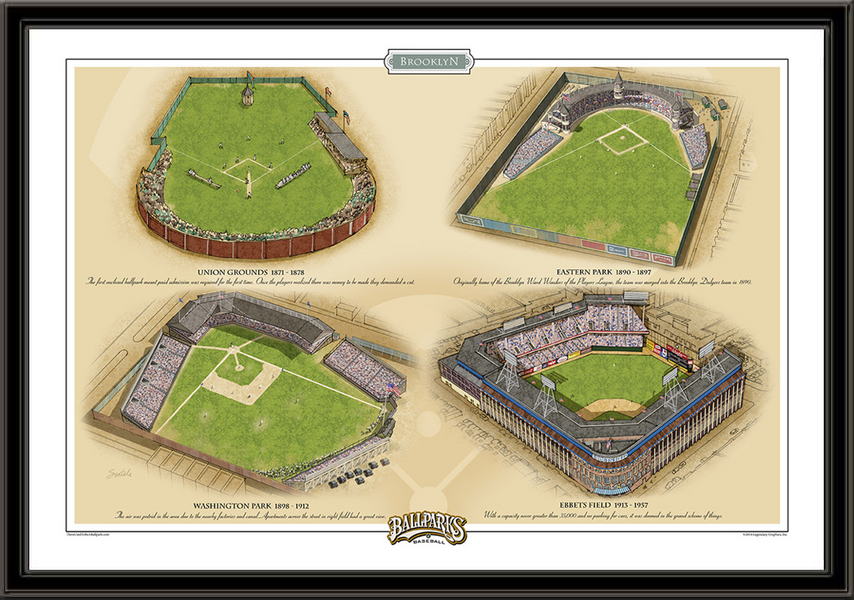 Celebrating the Iconic ballparks of yesterday and today, this vintage print shows the historic ballparks of Brooklyn. Printed using archival inks on heavyweight paper, these prints are rated to be light fast for 72 years under glass.

The copy reads:
UNION GROUNDS 1871 – 1878  The first enclosed ballpark meant paid admission was required for the first time. Once the players realized there was money to be made they demanded a cut.
EASTERN PARK 1890 – 1897  Originally home of the Brooklyn Ward Wonders of the Players League, the team was merged into the Brooklyn Dodgers team in 1890.
WASHINGTON PARK 1898 – 1912  The air was putrid in the area due to the nearby factories and canal. Apartments across the street in right field had a clear view of the game.
EBBETS FIELD 1913 – 1957  With a capacity never greater than 35,000 and no parking for cars, it was doomed in the grand scheme of things.

Collect them all!  Email for special pricing.